Hitting the jackpot for increased visitation

After achieving record visitation numbers, the Las Vegas Convention and Visitors Authority (LVCVA) came to us with an even greater challenge: increase visitation even further. Micro-segmentation research identified that adults 35-64 in the five major Canadian metropolitan areas (Vancouver, Calgary, Edmonton, Toronto and Montréal) were more likely to consider a trip to Las Vegas in the next year. Research also identified that exposure to Las Vegas product verticals, messaging and experiences generated a 9% lift in likelihood to visit in the following 12 months. Our job was to ensure the Las Vegas brand was visible to the most consumers within that age range, with the ultimate goal of exponentially increasing visitation.

With national television providing an efficient way of maximizing reach across the key markets, we quickly set out to remain top of mind within the five major metropolitan areas. To help in that effort, we forged a two-year content integration partnership with ET Canada, providing a strong contextual tie-in to Las Vegas. A promotion launching within ET Canada’s New Years Eve broadcast allowed us to create considerable buzz around the Las Vegas brand. We then developed long-form content that ran every night over the course of the week within the ET Canada broadcasts.

In the second year of the partnership, we brought ET Canada to Las Vegas. The show was broadcast from Las Vegas for one week, allowing the show to showcase a broad range of hotels, activities, restaurants and other points of interest within the city throughout each 30-minute broadcast. 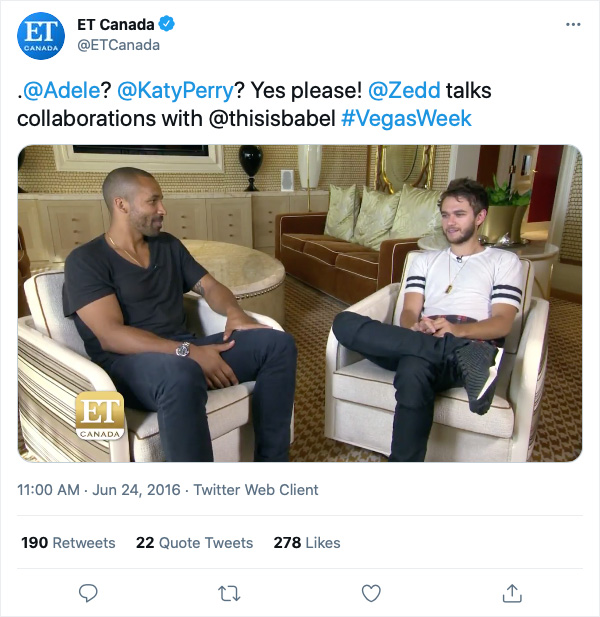 Post-campaign analysis confirmed that results were nothing less than outstanding. Total entries for our promotion were 270% above benchmark, with an 11% boost in the second year. Total opt-ins were 24% above benchmark. Total opt-in rate was a stunning 45%, amounting to 450% above benchmark. Over our two year run, our campaign generated over 275 million impressions and $1.8 million in negotiated added value and reached over 80% of our core demographic. Most important of all, Las Vegas experienced two more years of record visitation. Proving once again that the right partnership makes all the difference.